Once again, owing to our small classes and tutorial-style education, we are pleased to announce that all our Year 13 students have gained places at their first choice of university. With a pass rate of 100% and the percentage of A*-B grades rising by 8%, our girls have gained places on courses ranging from mechatronics (a combination of mechanics and electronics) to international event management.

On Speech Day, we heard from our Head Girl, Kami, about her aspiration to read pharmacy at Aston University. Pharmacy is an over-subscribed course with high grade requirements and we would like to congratulate Kami on achieving her goal.

Well done to all our Sixth Formers. We wish you every success in your future. We hope you keep in touch and let us know how you get on in your degree.

If there are any recent graduates who would like to share their results and next steps, please send a photo and a brief outline of your plans to marketing@hohs.co.uk.

We were delighted today to welcome family members of our school’s original founder as they enjoyed a nostalgic visit to Norfolk from their homes in North Norfolk and Hampshire.

Gladys Andrews founded the school at Hellesdon House in 1928 to educate her own children, moving to Hethersett Old Hall in 1935 when it outgrew the space.  Three of her grandchildren and a great-niece were amongst today’s visitors, some of whom have strong childhood memories of the Old Hall.

Grandson Michael (pictured below, left) recalls staying here often as a small boy. “My parents would drop me off at the beginning of the summer holidays to stay with my grandparents here”,  he told us. Looking around the upstairs boarding area brought back vivid memories:  “I recognise this fireplace”, he said, “ and remember going up these stairs in the mornings to my grandparents’ room to get dressed – I would have been about eight years old at the time.”

Jenny Youngs (nee Perowne, third left in the larger group photo below) is a great-niece of Mrs Andrews and a former pupil here. “ I was here from 1967-71 as a Prep boarder when Miss Lewin was Head ”, she said, recognising one of the current boarders’ common rooms as her first dormitory.

The family – some of whom had followed in their grandmother’s footsteps to become teachers –  looked through old photos and other artefacts and posed for pictures outside the headmaster’s study before enjoying a tour of the school and grounds with Linda Jones. We hope they enjoyed their visit as much as we did!

Hellesdon House was the first home of our school – from 1928 until 1935 when Mrs Andrews bought Hethersett Old Hall. 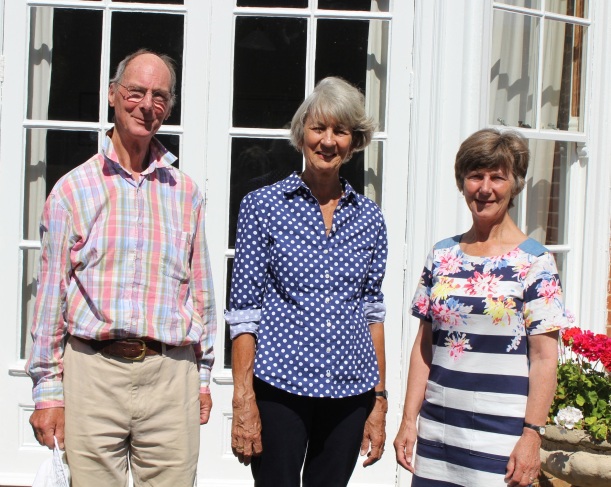 The three grandchildren of our founder Mrs Andrews who visited today: Michael (left), his sister Caroline (right) and their cousin Sophie (centre). Sophie’s mother “Barbs” was Gladys Andrews’ daughter – herself a pupil and, later, a governor of the school.

It’s wonderful to see former HOHS student Joy Chianu promoting science subjects to young women in this video from the prestigious McGill University in Canada. Joy, who won a scholarship to study chemical engineering there, achieved outstanding results in her biology, chemistry, physics and maths A Levels at HOHS, as well as in her EPQ. We are very proud of Joy and how she is encouraging other young women to study STEM subjects.

• We love to hear how our former students are getting on so if you have any exciting news, please get in touch with us.

On May 24th 2017 five of us (last year’s Upper Sixth) got the opportunity to receive our Gold Duke of Edinburgh’s award at Buckingham Palace. Most of us arrived early, which allowed us to explore the beautiful gardens, take photos and listen to the Royal Band in the glorious sunshine. Groups from all around the country were assigned a different area and we were part of a group of fifty people from Norfolk and Suffolk.

Presenting us with our award was celebrity soprano Laura Wright who performed at the opening ceremony of HRH Prince Harry’s inaugural Invictus Games debuting a piece she wrote called “ Invicible”. Laura also completed her Gold award and was therefore able to share some of her own experiences with us before we were visited by The Earl of Wessex. The Earl spoke to us about our achievements and asked us about our own unique Gold DofE experiences. Overall it was a great experience and it was lovely to see everyone, including former pupils, Megan and Libby. 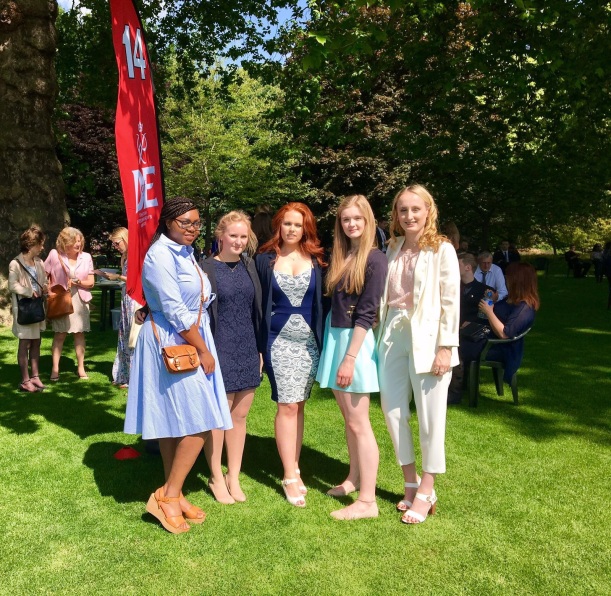 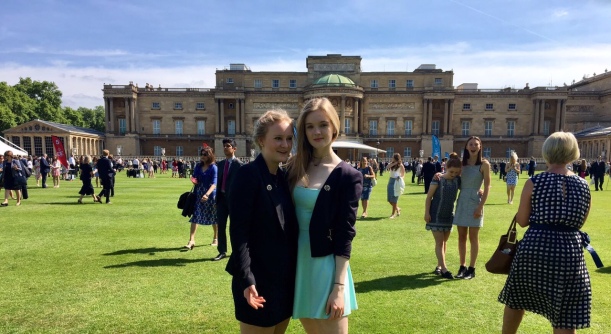 We would like to invite all past pupils and friends of HOHS to our Round-the-World themed summer ball on July 6th.   Head and Deputy Head girls Anna and Tami are creating a fantastic event with an international flavour…there will be a themed three-course dinner, dancing and a gorgeously-decorated marquee for an evening out to remember. There will also be a licensed bar, operating a strict ID policy, an official photographer and a photo booth.  The ball is also, of course, open to parents of ALL our pupils, from Nursery to Sixth Form, plus staff, as well as our Year 11-13 girls.

Don’t miss out – tickets are now on sale and cost just £35.00 per person. Why not make up a table of ten with your friends? Tami and Anna will be on hand at tomorrow’s SUMMER FETE to sell tickets: you can also reserve yours by calling us on 01603 810390 or emailing marketing@hohs.co.uk
>

Grab your passports, ticket and boarding card – we’re off round the world for this year’s Summer Ball on July 6th!  Head and Deputy Head girls Anna and Tami are creating a fantastic event with an international flavour…there will be a themed three-course dinner, dancing and a gorgeously-decorated marquee for an evening out to remember. There will also be a licensed bar, operating a strict ID policy, an official photographer and a photo booth.  The ball is open to parents of ALL our pupils, from Nursery to Sixth Form, plus friends, staff and old girls, as well as our Year 11-13 girls.

Don’t miss out – tickets are now on sale and cost just £35.00 per person. Why not make up a table of ten with your friends? Order forms were sent home in the end of term envelopes; old girls and friends can order from Reception or call 01603 810390.
>

We have a long tradition of welcoming girls from around the world into our boarding community, and appreciate the international dimension this brings to our school. This week, Mr and Mrs Crump have been attending three events in Hong Kong and China for English schools and colleges – and were delighted to be joined by one of our old girls, Elaine, who lives in Hong Kong. Elaine came along with her daughter Katrina and sister Joey, helping out on our stand and acting as interpreters for visiting parents interested in finding out about education in the UK.  Mr Crump says,

“A huge thank you is due to Elaine, Katrina and Joey. It was a great pleasure to see them and they were such a help on our stand, able to talk to potential parents and pupils and explain all the wonderful things about our school.” 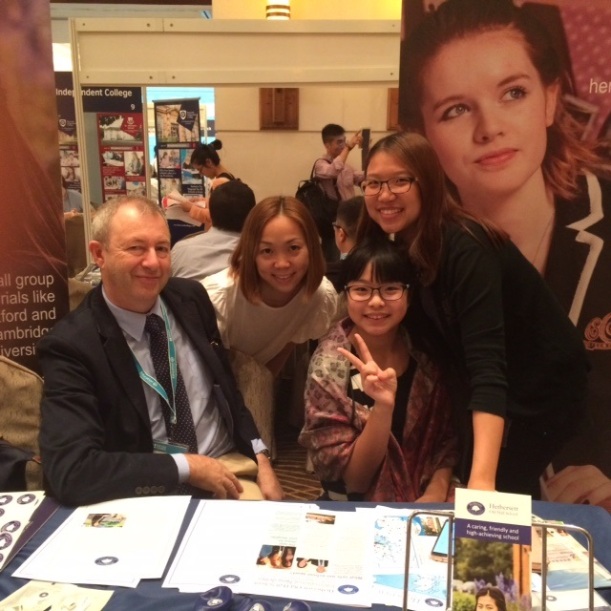 THANKS FOR STOPPING BY

© Hethersett Old Hall School and www.hohs-blog.com, 2012 - 2015. Unauthorised use and/or duplication of this material (both written or photographic) without express and written permission from this blog’s author and/or owner is strictly prohibited. Excerpts and links may be used, provided that full and clear credit is given to Hethersett Old Hall School and www.hohs-blog.com with appropriate and specific direction to the original content.

Countdown to the Summer FeteMay 18th, 2019
See you there!
Hethersett Old Hall School (HOHS) blog – an independent day and boarding school near Norwich, Norfolk.
Blog at WordPress.com.
%d bloggers like this: